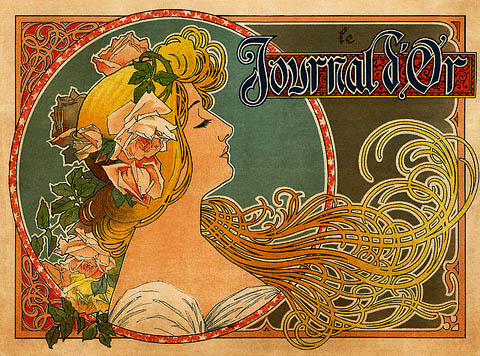 Abstract forms and barely legible twisted lettering was not created by the bands of the 1960s of which it is so synonymous, it was created almost an entire century earlier.In the 18th century during the industrial revolution, the way of life was changing drastically with new technology being introduced within every facet of life. While the tech was great, artists of the time were not too fond of this new dull and constricting art and architecture. Out of this came an art movement to challenge what they saw around them, while it has many names such as Jugendstil,  it is most commonly known as Art Nouveau translating to “New Art”. This movement was meant to highlight the bright and energetic life of the city rather than the mundane factory, and assembly line life of which it was becoming. Art nouveau is characterized by feminie figures, organic line art, soft colors, with warping and twisting curves.The artists of the Art Nouveau movement believed that aesthetics and function coincide and are not mutually exclusive. That regardless of the object, it still has the capacity to be beautiful. While the 1960s and 18th century are almost a century apart, the social and political climates of the time are more similar than one may think. Each era was full of societal changes and technological advances that produced amazing art as a response.

The hippies in the 1960s were a countercultural movement that rejected the conventional way of American life. They lived freely and went to a lot of outdoor concerts. These concerts were those that played psychedelic music from bands such as The Grateful Dead and The Doors. Thus, flyers became the new way to entice people into coming to a concert, but the old straightforward flyers were not going to cut it. Thus, artists of the time such as Wes Wilson borrowed from Art Nouveau and made new flyers that took the essence of art nouveau but intensified everything, such as color and form. During this time, Art nouveau was already taking form again within the fashion of the 1960s, the floral and twisted patterns of textiles reflected the attitude of those wearing them.

So how does this Factor into Fashion?

Just as the two aforementioned eras have experienced a shift in their political, social, and technological climate it can be argued that now we are as well. The past two years have been action packed with the Presidential election, race and social justice, a global pandemic, and climate change, to name a few– and our clothing is reflective of that. It’s no coincidence that psychedelic trends are now taking root again within fashion, it is a clear response and call for the lax, carefree feeling that a large portion of the youth and population want back!