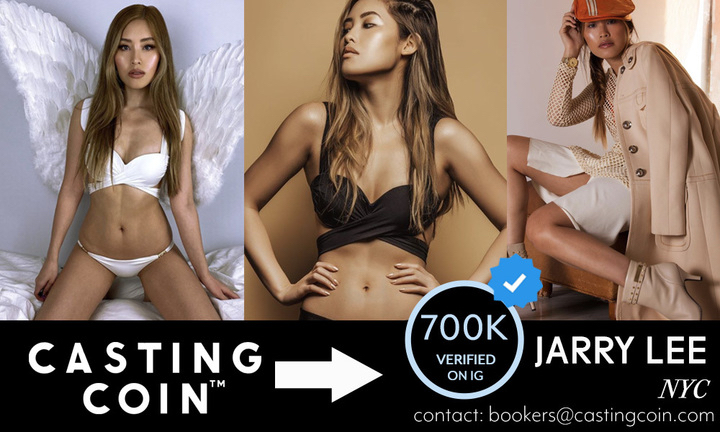 Jarry Lee, from Netflix’s hit show “Dating Around,” has joined the Casting Coin Roster! She was featured in season 1 of “Dating Around” and has continued to grow since, via social media.

Jarry Lee is a British-American model and influencer, who has a verified platform on Instagram @jarrylee. She also has a following on TikTok @jarryleeofficial.

Jarry Lee started her career off by going on Netflix’s hit show “Dating Around.” Jarry was actually asked to join the show, where she would soon speak openly about her bisexuality and the stigmas surrounding it. Ever since then, she has gained mass amounts of exposure and is even recognized from this experience!

“I hope that my platform inspires young women to pursue their passions — I try to show that you don’t have to follow a traditional path, but instead can create your own trajectory and dream job.”

Social media has also helped Jarry in her career of modeling. She has been able to book gigs, and be discovered all through her platform. Jarry says social media is the perfect platform to showcase people with not only good looks, but people with personality and with a fanbase, as well.

Jarry Lee has done numerous amounts of creative editorial shoots that have inspired her. She has worked with big brands, such as Lancôme, Maybelline, Revlon, Apple, Google, Walmart, Ben & Jerry’s, L’Oréal Paris, Urban Decay, DKNY, Vivienne Hu, Samsung, Tinder, and so much more! Jarry has also worked closely with Bobbi Brown. Jarry admires Bobbi Brown for her expertise and talent, and appreciates “her approach to natural beauty and emphasizing it.”

One of Jarry’s favorite shoots was for 7Hues Magazine, with photographer Paul Tortora, stylist Danielle Aspinwall, makeup artist Pamela Dintzner Contreras, and hairstylist Kelly Marie Roccapriore. She loved working with this team environment and appreciated the unique accessories. The pictures from this shoot are included below.