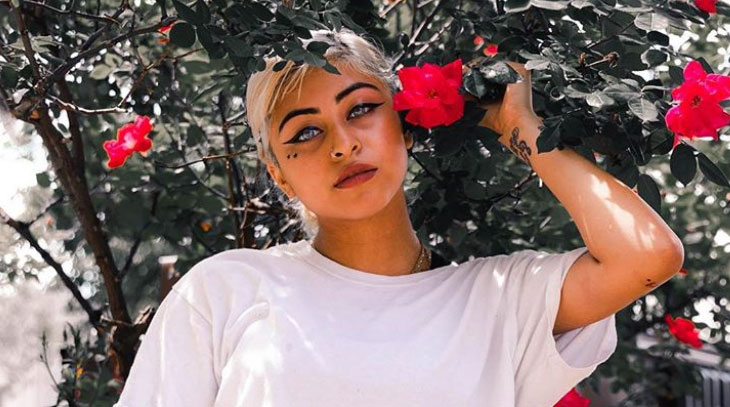 Mel has over 110,000 Instagram Followers. She is a badass babe and wants you to know it too. She is most likely found in the local skate park or practicing taekwondo as a second degree black belt. That’s right, don’t mess. From eyeshadow to kickflips, @h0lymel has all the tricks.

“Style is by your own definition, so you might as well go all out”

When it comes to style inspiration, it tends to be streetwear worn by pedestrians in the Big Apple. Thrift stores in the Bronx are her go to shopping. As a window of expression, how you decide to dress is up to you. “Style is by your own definition,” Mel says, “so you might as well go all out.” She sure does! Any disapproval faced in the past now contributes as bullets of confidence. For instance, when Mel took her makeup matters into her own hands at fifteen, her mother didn’t quite understand her looks. Yet, that couldn’t stop her newfound passion for dressing as her inner self.  As an influencer (with over 100K followers!), she preaches the significance of doing your own thing.

Mel stands up for herself and the people she loves. She holds family above all and is secretly a country girl at heart. She demonstrates her love for the fam with a tatt shared with her twin brother. Located on her wrist is the time of his birth and he has her time to match! She is inked up–some of her body art being a little less sentimental. As a chick who values living in the present, she commemorated Friday the 13th at a Bronx tattoo place, simply because they were giving them for only $13! How festive. Mel has taken up this offer two times now, supporting her love for the old film.

As a person who values her individuality, she surrounds herself with people who appreciate it. She learned most of her morals from a summer camp in Lake George. Though she no longer spends her summers there, Mel holds onto the lessons she learned. Similarly, I’ll remember the most prominent lesson she taught me that day: those who matter don’t mind and those who mind don’t matter.