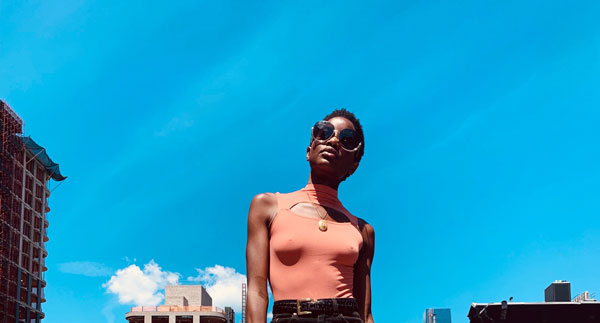 This weeks focus has worked with Estee Lauder, Pantene, Clinique, Fenty, and even Apple. Geli is a self-made woman and isn’t afraid to call herself her own idol. At thirteen, she knew what she wanted: to be a model and to make a difference. When she got old enough, and without saying much to her family in Maryland, she ran away to New York City. Before long she found herself modeling in South Africa! Amazing experience but she wanted NYC. So after succeeding in Africa she found herself back in NYC as a signed model in 2015.

When asked where she would rather be, her wisdom has taught her to enjoy the present. “I tend to appreciate where I am,” Geli says, “I chose to be here.” Short for Angelica and originally from Cameroon, West Africa, Geli keeps it simple. The words she lives by is just one: “be.” She motivates others to feel comfortable in their own skin and “feel the feels.”

A naturally laidback person, one who responds to rejection with an oh-well attitude, keeps us on our toes with her wild side. A thrill seeker, hoping to skydive eventually and a world traveler whose goals are to visit two new countries a year, is always willing to go all out on camera. The more physical and thoughtful the photo shoot, the better. Geli loves having a good time and searches for adventures. She is always down to get silly or keep it real and discuss some philosophy—one of her many hobbies.

She has strong experience studying the world of economics and marketing and is thus a forward thinker. With so many talents, it is hard to decipher where exactly life will take her. What we do know is that setting a goal for herself and achieving it is her ultimate confidence booster, aside from listening to good music. Geli is a thoughtful person, giving attention to what she says before she makes the statement. Similarly, her go-to music genre comprises of poetic lyrics that send a message in each song.

Geli believes in magic and the proof is within life itself—where nothing really makes much sense. At the same time, life is what is most beautiful to her. To her, beauty is finding love and appreciation for oneself. She respects her elders by looking up to models like Twiggy circa the 1960s and also admires more modern models such as Daria Werbowy for being somewhat behind the scenes.

Her spirit animal is not much of an animal, but rather pink fairy dust. If she could be a car or shoe, it’d be a shoe because “shoes tell stories.” Geli is such a character and Casting Coin eagerly awaits whatever she has next in store!

Geli + me shooting in the Meatpacking District on July 1st around 2pm. After, we went up to the Highline and shot some more. Finally, we ended the session with an interview at a cafe in Chelsea. Good times!